Whilst many people overseas seem ok with the way their Yamaha FJR300 corners, riding on tight narrow roads here and being used to lighter bikes I wanted to quicken the steering if possible. My motorcycle is 2014 FJR1300A and coming from smaller bikes prior it always feels like it understeers needing additional bar input (counter steer) to hold a line or initiate turn it needed much more leverage on the bars than I have experienced on other motorcycles.

The self claimed experts on the owner forums insist this big motorcycle steers light as a feather. Simply inflate the tyres a few more PSI and it turns like a 125cc one senior member told me and when I questioned that I was flamed by all and sundry whom I doubt have ever ridden any other motorcycles to know better. I am not braking in corners and the tyres have even wear, it’s simply a long and heavy bike with a huge fuel load up high.

There is a partial solution – but it’s nothing being suggested on owners forums.

Before I get to what has provided the best change to the way my FJR steers I want to explain the journey I took. First of all I got the pump up the tyres thing from the owners forums. But my bike was already inflated to 42 psi. And every tyre I have fitted since has been inflated by the dealership to that or higher 42-44 psi. Its a heavy bike so inflating to maximum is what tyre engineers recommend – not some miracle fix the forum experts came up with.

So the first thing I tried was to set the rear suspension preload to firm. This slightly raises the rear ride height or reduces the sag and thus slightly sharpens the steering angle. This made a small but noticeable difference to turn in speed but at the sacrifice of ride comfort when riding solo. However once accustomed to the difference I was not able to go back so the motorcycle has remained in this setting.

Following this I found the best result was setting the front pre load to soft or increased sag in the ride height which of course opposite to the rear firm preload will slightly lower the front thus further sharpen the steering. Very minor affect, not as noticeable as the rear preload but again so easy to do.

Inspired by this slight improvement from tiny change in ride heights I raised the fork legs in the triple clamps about 25 mm to lower the front and further alter/sharpen up the steering angle. You can do this fairly easy on the FJR by loosening the bolts at the mid and upper fork leg clamps and then sliding the fork leg up gently. This then made a further improvement which is most noticeable when the fuel load dropped from full to 2/3 or less and the motorcycle was operating without such a high COG.

The steering at this point with the combination of things done was a noticeable improvement from standard. No adverse affects. Still ample ground clearance. Not unstable as owners forums were warning, actually it still displays understeer and remains slow to change direction but an improvement over stock for zero $ outlay. 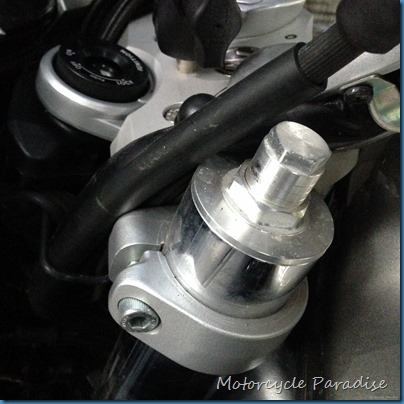 The next thing I looked at was ergonomics. The bars on the FJR1300 are a bit low, slightly too far forward and little narrow when compared to a standard motorcycle or other large touring motorcycles. That’s how I find them despite being 6’ tall. I installed a bar raising plate and this moved the bars up 25mm and back 40mm bringing them to a position that is closer to natural. Raising the bars provided more leverage which helped a lot. It also made the FJR comfortable like a touring motorcycle should be.

Along the way I had been trying different tyres. The FJR came with Metzeler Z8 tyres to begin with, these wore unevenly on the front getting scalloped badly. Pirelli Angel GT made the steering lighter but they are soft and the heavy FJR tore the sides away on the front tyre in just one tour then the steering slowed dramatically with the triangle shaped front tread and the rear tyre was bald by just 6000km.

The Michelin Pilot Road 4s were slowest steering and the front was premature failure of the carcass about 3000km where they were already half worn out so I just got rid of both tyres. Second failure with Pilot tyres which I will never fit again. The Bridgestone BT-023 GT steers not a fast as the Angel GT but it wears evenly and lasts 8000-9000km which at least means not needing tyres mid tour which is a huge hassle in Japan. 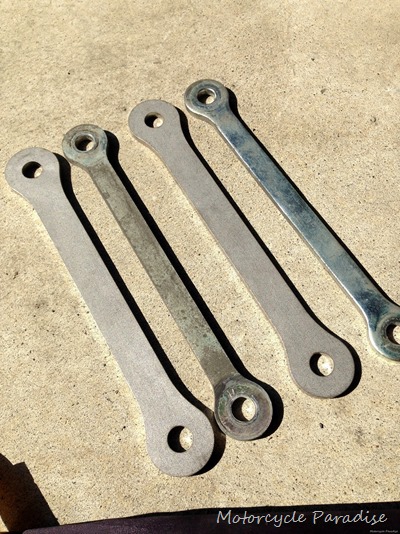 Lastly I decided I would change the rear suspension links called the dog bones to raise the rear ride height and further sharpen the steering angle. I had left this to last since it seemed the hardest but in fact it can be done in probably 30 minutes. I chose to fit 30mm raise links which is achieved by a very minor change in the links. I sourced them for about $39 from a eBay retailer in Germany with good customer feedback. Well the transformation this brought once fitted was the most of anything so far (but please note it was in conjunction with the other things already). The FJR straight way felt noticeably lighter to turn. Ok you still are riding a heavy tourer but it honestly felt somewhat easy for the first time ever and actually became fun to ride on tighter corners not needing me to drag it around every bend. It will hold a chosen line easier now and does not want to understeer.

It is still a big heavy bike which you need be aware of but now it steers well even in very tight corners. The best way IMO to install the dog bone links is to put the bike on the centre stand and loosen the dog bone links then use a jack to lighten the rear wheel from the link pins (not supporting the bike which is on stand – just the wheel weight) take the top pin out then remove the shock lower mount pin and rotate the lower link pin forward past stand then remove the dog bone links. For install reverse and use the jack to position the wheel at correct height to get top pin back in with new length links. I took loads of time and it still was all over in 40 minutes. 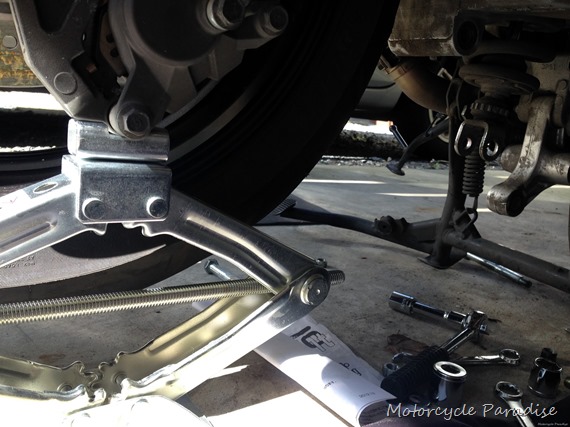 Update: I finally managed to try a set of Dunlop Roadsmart tyres (series 2 as could not find series 3) Well these are by far the lightest feeling tyre for steering on the FJR and they feel great mid corner and change of direction as well. Of course you still are riding a very heavy bike but for steering feel these are a noticeable improvement from any other tyre I have tried. (in conjunction with the modifications I have made) I will update my total mileage on these after I have done a couple of tours, after 1000km I think they are not going to last as long as the BT023’s.

My previous long term Yamaha FJR1300 review is here if you would like further information.