I had been ready to embark on a extended tour overseas (prior to breaking my collar bone) heading to cold and wet places like Scandinavia so decided to invest in a set of waterproof boots which I thought would also be pretty handy for tours here in Japan. Prior to my Vitesse boots I have had a long history of buyer disappointment when it comes to boots. I spoke rather unflatteringly before about two pairs in particular but have come to think perhaps it is my feet that are a hard to fit and not the boot’s somehow being faulty.

Unfortunately I found it very hard to source touring boots in my size the shops here, actually it was impossible. Lots of casual riding shoes, then lots of racing type boots but nothing much in a waterproof plain boot. And so I ended up ordering from Motorcyclegear.com who I have done business with a few times and went for boots that were both on sale but also with reviews of consistent sizing. 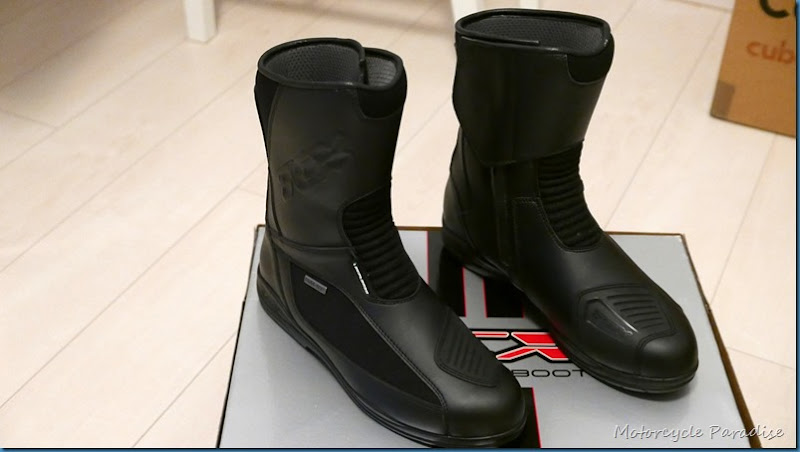 TCX is the Italian company formerly known as Oxtar which might ring a bell for a few readers. Oxtar had a good reputation for making quality boots long ago however brands are known to rest on their laurels very often while profit taking so I do not put too much faith in any particular brand name with anything I buy. That said I could not find anything but glowing reports on these boots and the brand.

I take a size 9 Aus which is a size 10 USA but you know how sizing varies these days due to substandard quality control so I checked many sizing feedbacks on other sites which seem to suggest no problem. Length wise they are a lot longer than other size 10 US shoes I have and look huge. Actually I thought they surely will be too big when unpacking however despite the large appearance they are very narrow around the ankle upper arch region. Looking at the photo that is the area where the white Gore-tex label is showing.

The side opening has very coarse (aggressive) Velcro fitted. It is difficult to actually get them undone one handed as the amount and type of Velcro is excessive. The zipper had a loop of similar strength Velcro hook stitched to it but I had to cut if off as it is so sharp it almost drew blood on my thumb. Well I suppose better to be heavy duty than light weight but since there is a Gore-Tex gator fitted a simple fine grade Velcro or magnet closure system would have been more elegant for the leather flap. Once on they are reasonably comfortable but not in the same class as the comfort level of the Vitesse boots (but we are talking boots 1/3 the price too).

The TCX are in a word ‘stiff’ and that amplifies the tight ankle region. I have read TCX boots take some breaking in, I hope that is all it is. I have worn them so far on four days of riding and I think on the last day I noticed a little bit of give but more time is needed to see if they in fact become truly comfortable. I like the sole very much which seems to have better grip than both my summer boots. They breath well however like all WP boots are going to be hot in summer.

Styling is plain but that’s all I want from a touring boot. Needless to say no issues in some rain on the way home wearing these. Much better than having rain covers on non waterproof boots which manage for awhile but always start to get damp at the lower edge as water splashed up from the road sneaks past the cover where it meets the sole of the boot. At $169 for a Gore-Tex type waterproof boot these have the potential to be a value buy but I am reluctant to recommend them so far due to the seemingly odd fit. I will update this in a couple of months after further use.

Update 1. Well so far they seem to be working out ok. Still a little difficult to get on and off however slowly getting better. Comfort on the bike is fine. Absolutely waterproof as proven in Ireland where I rode in steady rain for days. The only part I dislike a little is not so good for walking in, partly due to the shape of them being long and narrow that has the toe section jutting out where I am not used to it being.

Update 2. Now with more miles on them they are not really loosening up but I suppose have enough give in them. These are seriously stiff boots but when riding I actually do not find them uncomfortable in anyway. Only when off the bike walking around am I reminded that I am wearing boots. On bike I cannot think of anything to fault them with, comfortable to wear all day and indeed I have done a couple of 10 hour days and plenty of 8-9 hour days in them now without any discomfort at all. 100% waterproof for sure as they have seen a lot of rain so far. They are warm enough in cold weather if you wear good winter socks and breath well enough not to be swamp boots on days when the temperatures rose to 25 or so and stuck in traffic with radiator fan send plenty of hot air back to make the real feel closer to 30 degrees. Well despite some apprehension I have to say these are working out fine.

Update three. Still in god condition in 2019, still waterproof and they have broken in at long last and now more comfortable. They might just last me rest of my life at this rate, no joke, from originally a bit undecided I am now thinking these might be the best value boots you could buy.