It has been a long winter. 6 months of cold and rain. A rare fine day arrived so I decided to try my luck at seeing Mt Fuji. I have a poor record on this after my first ride in Japan in 2008 it has been always been obscured by clouds when I have been passing but not today.

I chose to ride the shortest route from my home along the ocean and via Hakone, both of which were a bad idea. Off the highways in urban areas traffic can be very heavy in Japan and today despite the pre morning peak departure I still got stuck. Guess it can’t be helped when close to Tokyo.

Late arrival at my chosen view point to discover my Panasonic Lumix LX100 camera seems to have major focusing issues for landscape photos. Oh well back to the phone again until I work out why. Here is Mt Fuji poking its head up on the Hakone Skyline a bit along from my first photo spot. 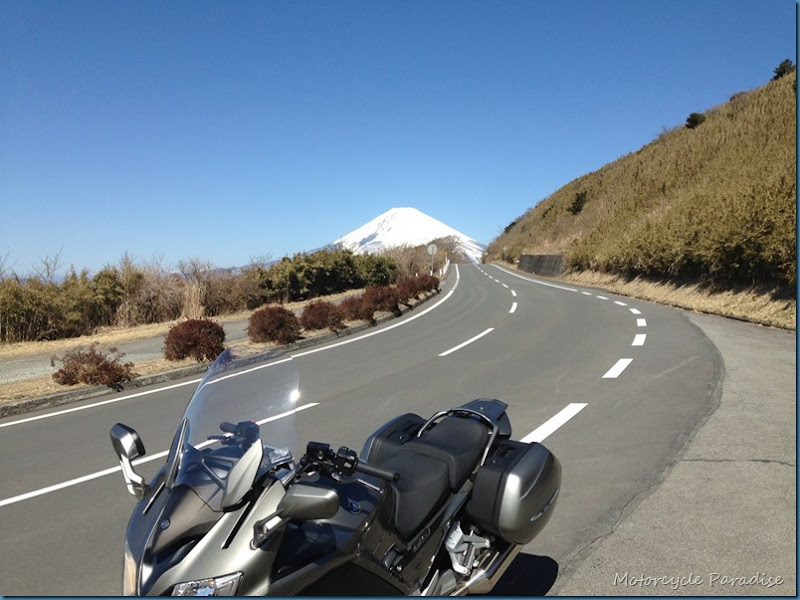 Next I dropped down onto the west coast road. I have not posted any Japan road signs for awhile so here is one for trucks, another type used for heavy vehicles has a parachute out back which I will try to remember to capture next time.

More heavy traffic which would prove to be the theme of the day, I am sure with local knowledge I could have avoided much of it but I eventually made it to the coastal fishing western side of Izu peninsular and with such a nice view of Fuji I decided to stop and have a very early lunch. 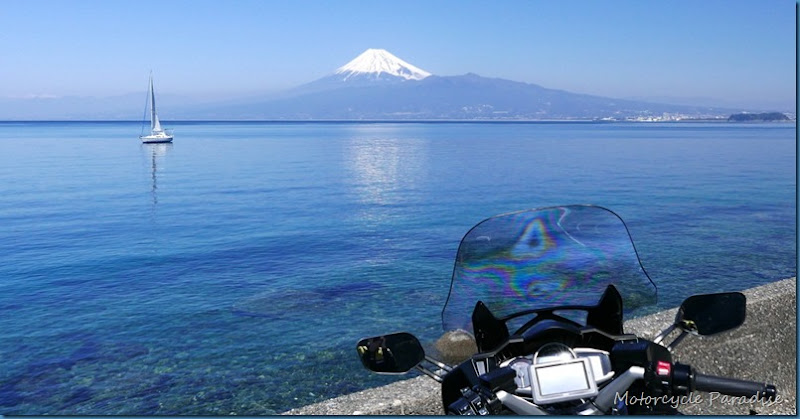 From here the riding was excellent along the ocean with just light traffic. The rail lines below reminded me of the movie Spirited Away with the train that crosses the ocean but actually these are slip rails for a dry dock. 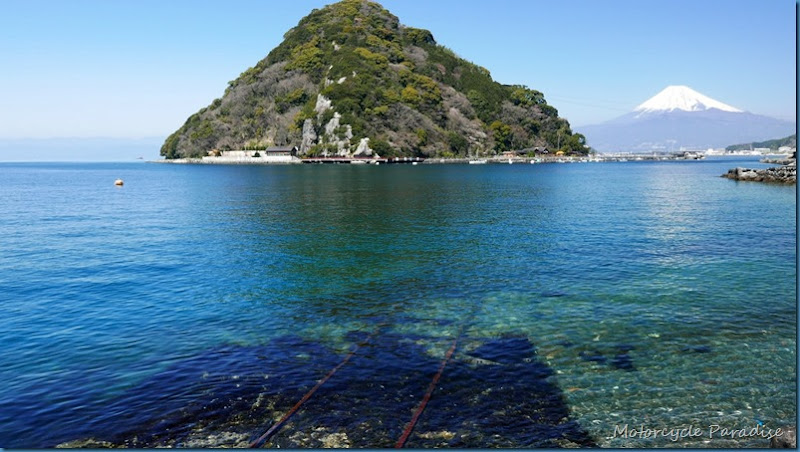 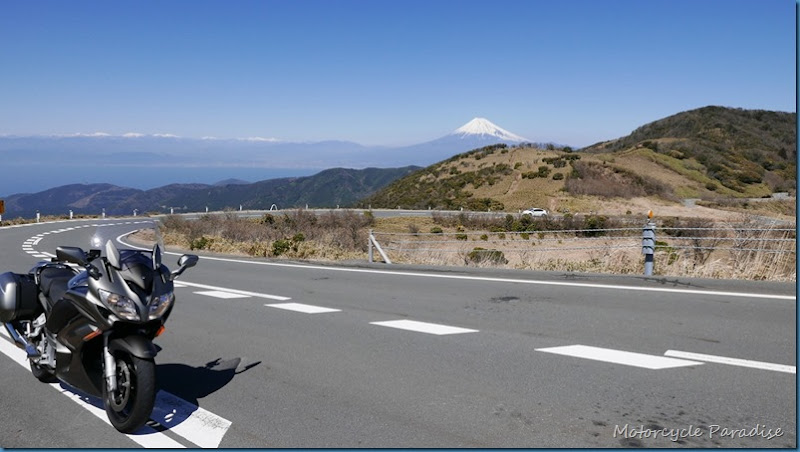 Next I climbed back up high to ride some of the nice roads that criss cross the mountainous interior of Izu. I miss the riding around Nagoya, that area has so many wonderful rides but alas I am stuck in Kanagawa for the foreseeable future.

I have stopped taking so many road photos these days even though I know riders love to see them (as do I) but often I have just managed to pass another string of cars all stuck behind an even slower lead vehicle when a nice photo opportunity presents itself and I just think do I stop or look for another spot later, which of course never eventuates. Down to the ocean with some interesting rocky islands and then back up another mountain pass, some good riding to be had in this area but I cannot imagine how bad the traffic must be on weekend.

I came across this intriguing piece of infrastructure on route 414 before reaching the Izu Skyline road. Must have been built in the bubble economy days as it is a rather elaborate way to ascend a small ridge on a minor country road. 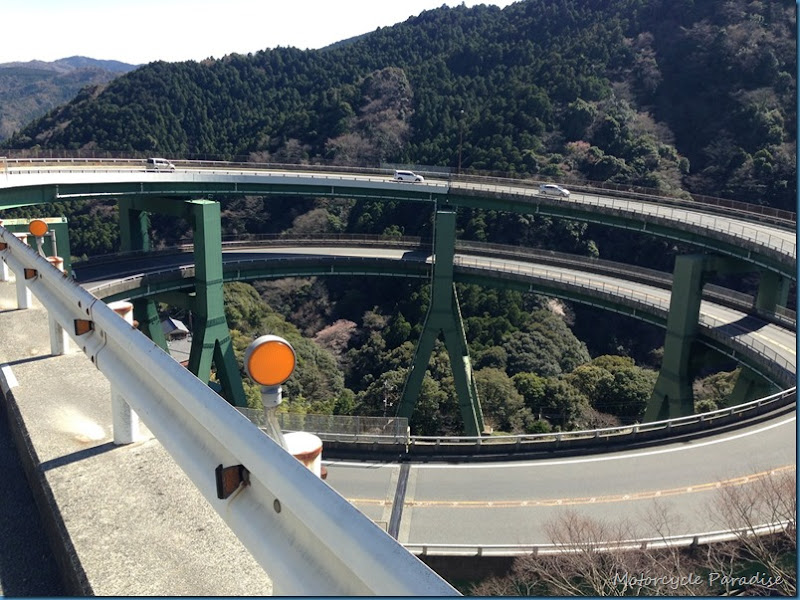 No photos on the return of Fuji in afternoon sun thanks to the LX100, hope I can sort that out or they bring out a firmware update. I enjoyed the day out and riding the FJR, which comes into it’s own in cold weather but I seem to have over stated last post how much better it rides with the revised steering geometry. I have sharpened it up a little further, the forks now raised 20mm in the triple clamps and it has made a difference when the fuel load is under 1/2 but above this where the bike is mostly operated the whole heavy under steer front end is largely unchanged. Just too top heavy I guess. As much as I don’t want to I am now mostly resigned to selling but I have no idea what to replace it with and not yet one year old so would be poor timing too since the main depreciation hit has already occurred. I’ll think some more as seem to be making all the wrong choices of late. 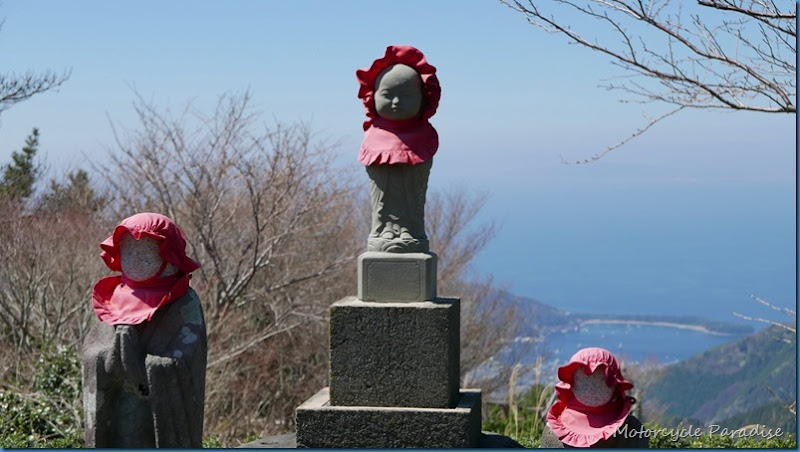