My motorcycle tour for this years festive season was impacted by weather and personal illness so I ended up spending more time indoors than on the road.
This allowed me to catch up on some reading and I will give a brief review on each. 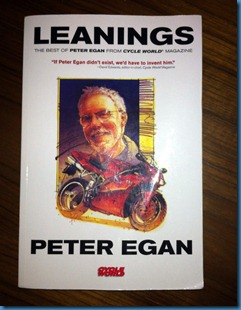 Leanings
This is a selection, a ‘best of’ collection, of short stories by Peter Egan who writes for Cycle World, a North American motorcycle magazine.

I purchased this based on the glowing reviews to be found on Amazon when they sent me a voucher last year. It is an easy read of mostly short articles, some about camping motorcycle trips taken by the author and most about collecting and restoring old motorcycles.

Unfortunately none of the articles really grabbed me in anyway. Not a boring book but not terribly funny or insightful (for me) either. Perhaps not being interested in owning more than one bike at one time the book is wasted on me. I love the look of older bikes but not restoring and maintaining them. I did that with old cars for most of my youth and now consider that I just wasted those years and a awful lot of money.

Anyhow most people love this book and I wish I could write 1/2 as well. 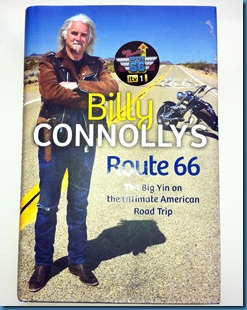 Route 66
Picked this book up on eBay for next to nothing. I have not seen the TV series but thought the book would make a nice holiday read.

When I mention I did a tour of North America people always say ‘Route 66?’ and if I say no then they give me a puzzled look or make some surprised comment as if I went to Egypt and did not see the pyramids. But if looking at the best motorcycle roads to ride then you would steer clear of the remains of 66 as it does not offer a rider much.

Billy Connolly is a funny guy and there is good some laughs in his Route 66 book, but quite a bit of it is little dry and slow reading and there is not really much about riding.

I think the TV series might be a better choice than the book, that is after all the medium he is known for and the visuals of Billy riding through the countryside would add a lot. 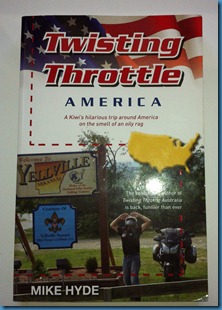 Twisting Throttle America
Mike Hyde is a New Zealand guy who loves iron butt rides. He rode around Australia in a 17,000km butt breaker and then decided to do America.

Mike is a very funny guy, he has a bit of a warped sense of humor and you will at first not realize half of what he is saying is in jest, later into the book you almost need to go back and read from the start now that you have ‘tuned in’ to his style and sense of humor.

In his 2nd book Twisting Throttle America you will follow Mike as he rides 50 states in 60 days and as the maths suggests it is fast paced trip at times which is perhaps my only gripe in what is otherwise an enjoyable read.

I do wish he had talked more about the many good roads in North America. Recently I rode the North West USA and Canada and was totally blown away by how superb the riding was there, easy up with the best I have experienced anywhere in the world if you stay away from the Interstates.

That point aside of the 3 books this is the only one I am recommending. It is a book for riders and is genuinely laugh out loud funny at times.