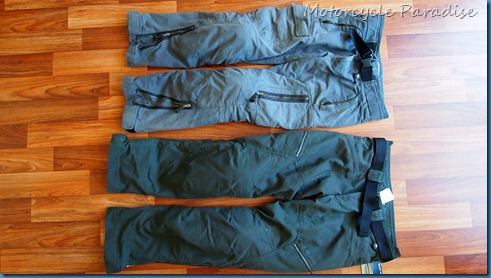 My original pair of BMW City pants have proven themselves to be really versatile and I have just grown out of them size wise so when looking around for a new pair of riding pants I decided to go again with the BMW City Pants, this time version 2.

I used to ride in Draggin Jeans but after I had the fall on the ice in Japan the idea of not having knee and hip armor seems unacceptable to me. That fall was in Alpinestar pants but the armor in those pants I think was the reason I was not more badly hurt. And I know you can get armor in jeans but the pants and armor need to stay in place to work which does not seem the case with the riding jeans that I have tried on.

The BMW armor is large and wraps around the knee and extends down the shin. I have worn the City Pants in a wide range of temperatures. Not a winter pant but acceptable in cool mornings and I don;t find them overly hotter than jeans in summer as they have a mesh inner liner and baggy fit that allows air flow.

If you wear shorty boots in summer then that will allow air to come up from below but on some bikes heat from exhausts means that wearing boots is actually cooler in summer so keep that in mind.

Alternatively on cool mornings when wearing my long boot socks the pants adapt fairly well. I wore them in Himalayas fine.

I’ve not crash tested them however there is ample accounts that can be read on the forums to suggest they work fine in this department.

The differences in the versions are to the pocket design, both of which work ok for me. My first pair have faded but the colour of the V2 is said to be longer lasting.

Lastly the included belt has double D buckle now whereas V1 had a clip in buckle which I think is better. Fit, finish, build quality is all very good and while more expensive than riding jeans they are a great all rounder that can double for warm or cold riding so I think worth considering.

Update – still using these in 2019, fantastic summer or mid season pants, best by far I have tried and much more comfortable then my textile pants. I have taken the huge knee armor out now and use under pant armor which I review elsewhere, it held in place better and easier to walk in off the bike.