New Zealand is a wonderful place to ride a motorcycle. I just had a week and a half riding the south island and apart from some mixed weather it was some of the best riding I have ever experienced.

(Updated  2018)
I flew to Christchurch to meet a mate who was joining me on this ride and wow that city is really in bad shape from the earthquake, I hope the can recover.

I booked a Suzuki Vstrom with City Motorcycle rentals Christchurch and we set off next day. First of all went to the West Coast over Authur’s Pass and via Lake Brunner. Beautiful scenery and great roads despite overcast conditions. 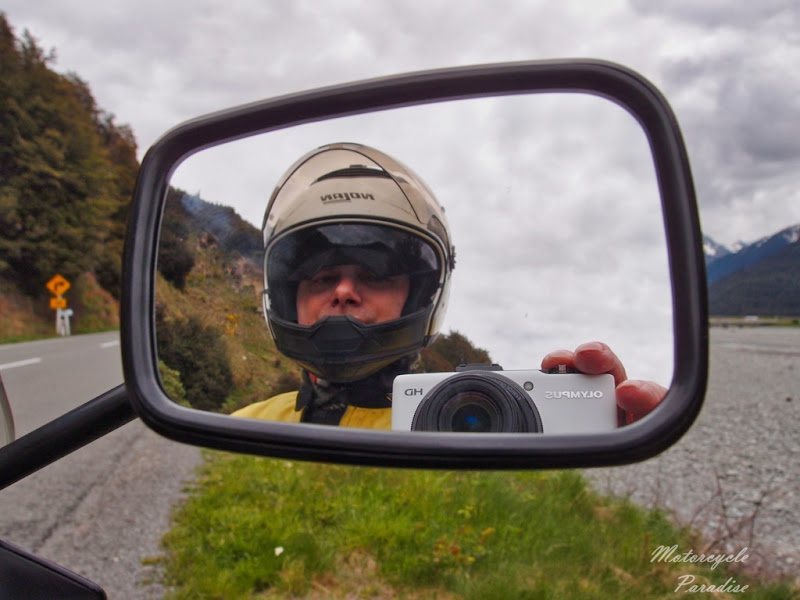 I have a new camera for this trip and my mate elected to use a new Go-Pro. 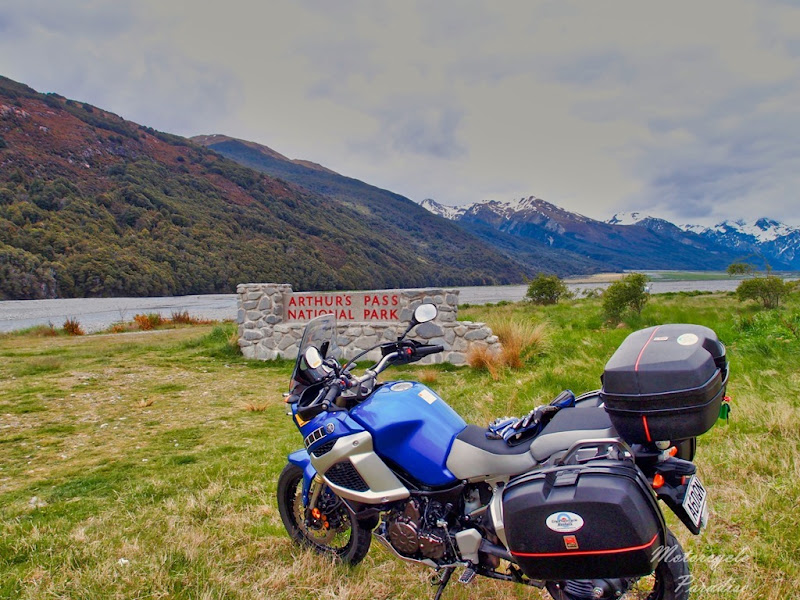 After this I rode north to Westport along the coast. Sun warms a little, curves that never let up for 90km. Generous road speed limits and low to zero police patrols outside of major towns. 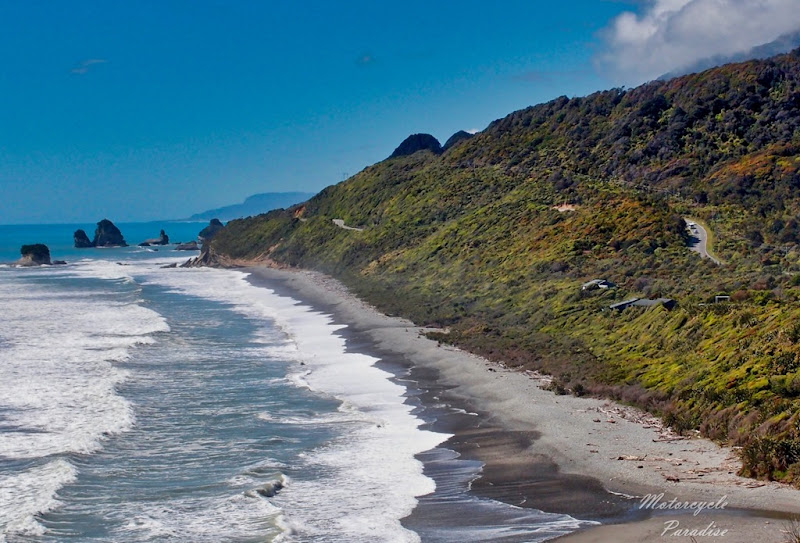 I really liked riding the Northern part of the South Island. There is a network of roads servicing the rural areas that are all well surveyed and surfaced with next to no traffic. 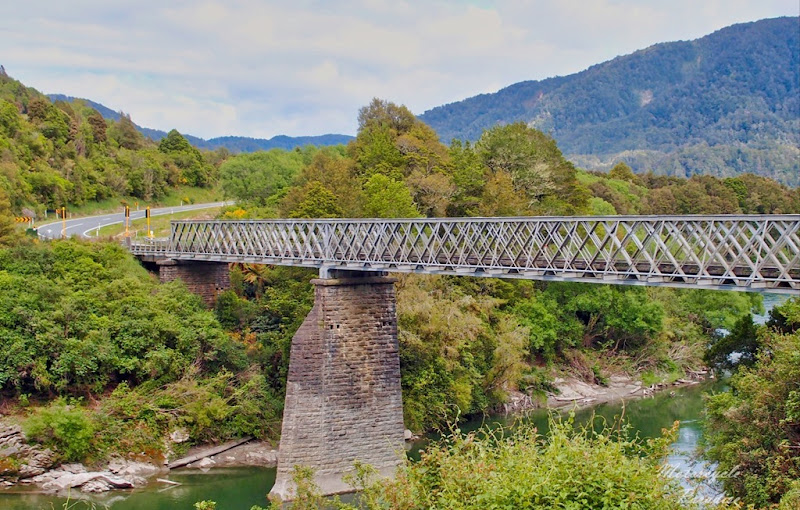 The Buller Gorge area was particularly good riding. The Lewis Pass also a lot of fun. 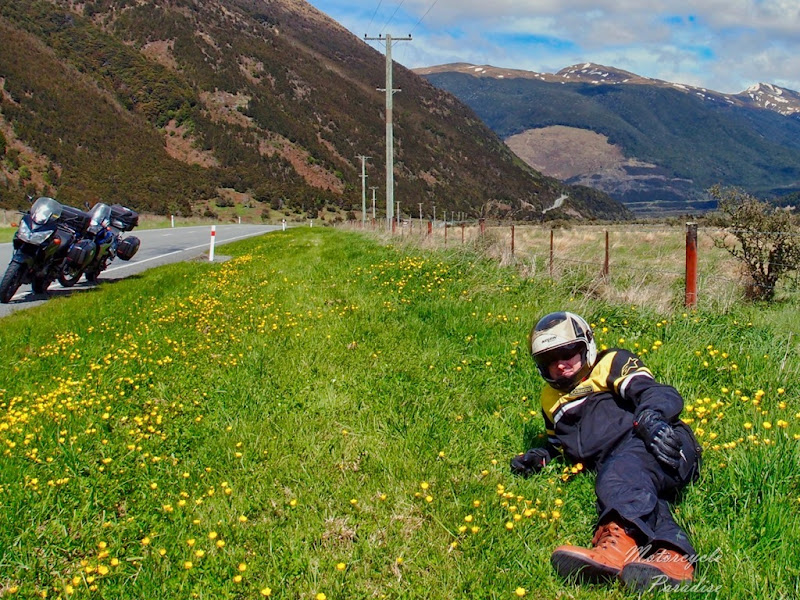 Riding down the west coast is at times dramatic as you skirt the ocean then have the mountains rise up as you get closer to Franz Joseph. I have already done the helicopter to the top of the alps so just chilled in town while my mate experienced it. 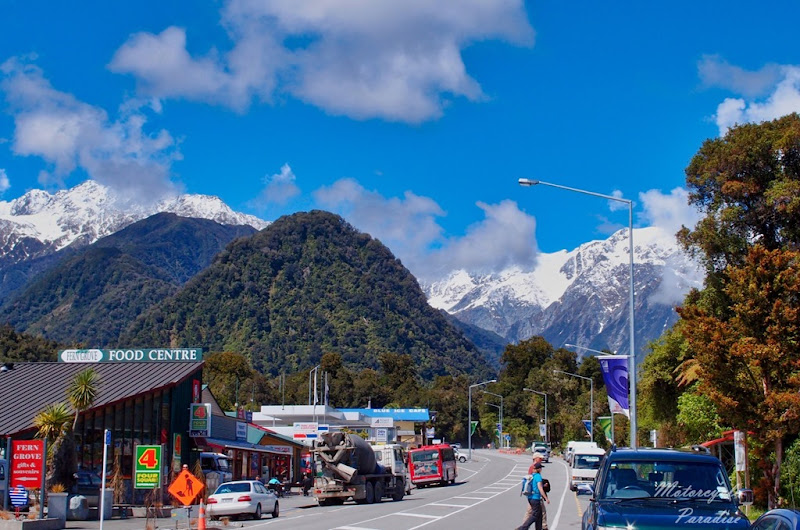 Look at those mountains, you could be in Europe, but this is much better, not crowded or difficult like I find Europe to be. 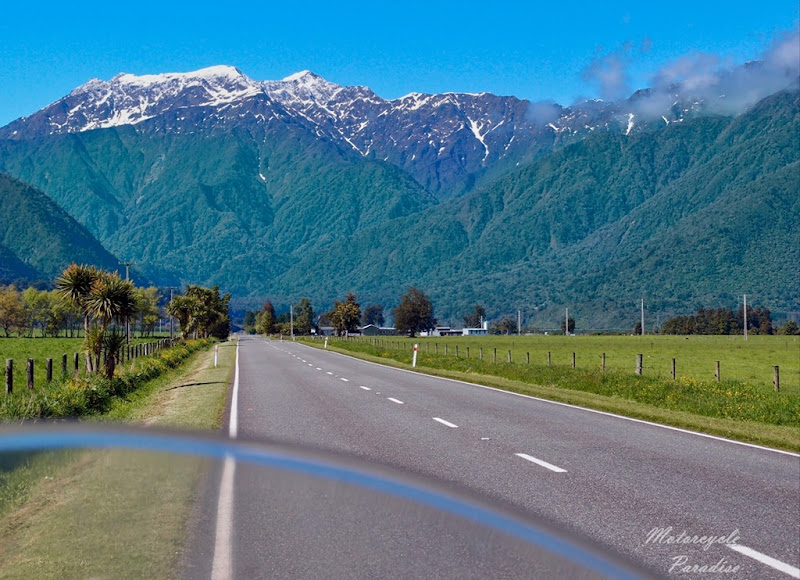 The Alps recede as you once again skirt the ocean riding south. There is a almost tropical feel to the vegetation but only for a short time before you turn left and climb up into the high mountains. Riding over Mt Aspiring you can enjoy a series of sweepers that go on and on. 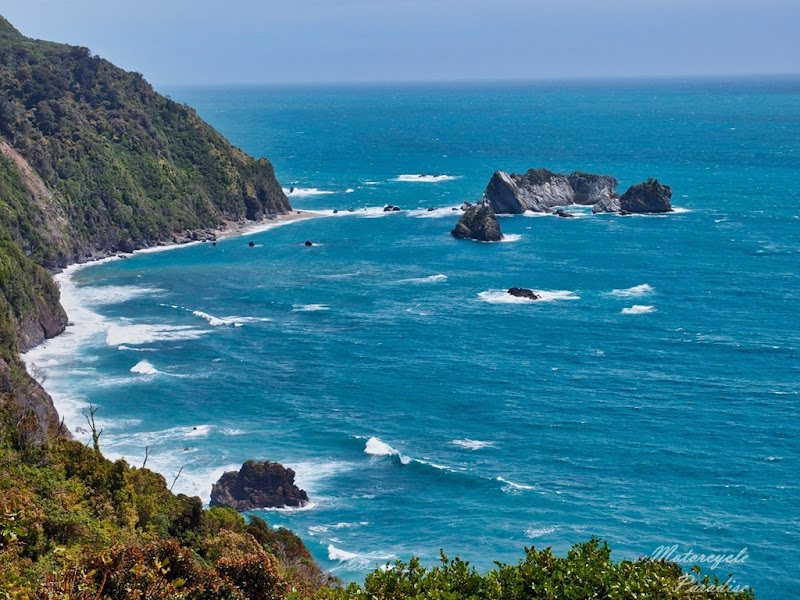 Exiting the mountain to Lake Wanaka where you hug the cliff for some exciting twisty road riding. 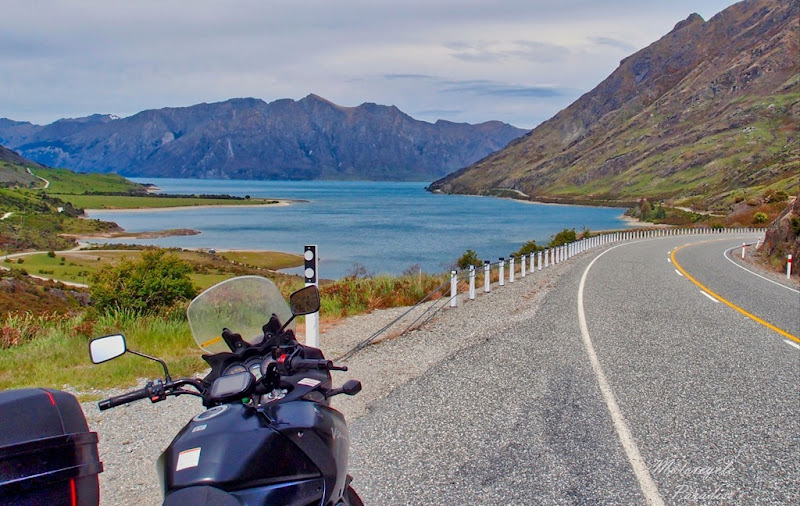 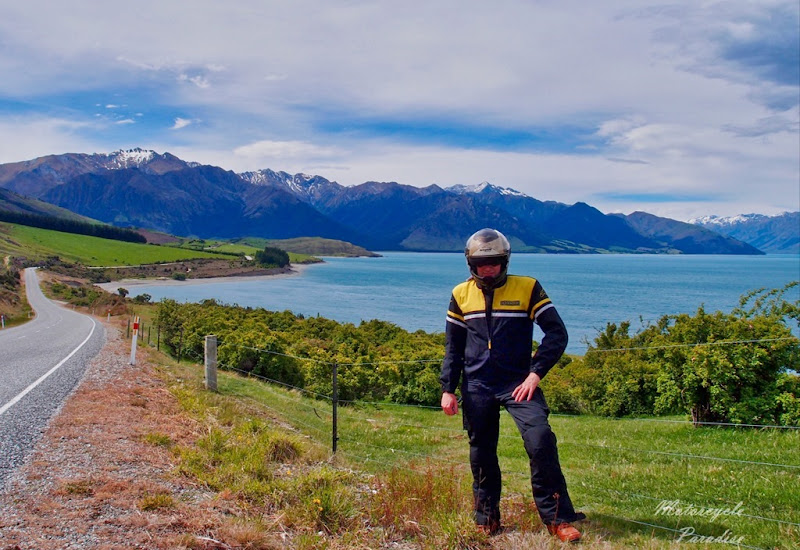 I know this sounds overused but the scenery is just amazing.

About now I had accustomed to the Vstrom and will try explain my thoughts on it from my riding experience. It feels large compared to a regular mid capacity naked bike however it is not difficult to ride. All day comfortable seating and very stable in the sweepers. Not as quick on change of direction, perhaps the 19 inch front wheel but just modest difference. I would have liked a little more passing power but only because I was following my mate who is quick rider.

I experienced very bad wind buffering despite adjusting the screen every way. I guess I did not personally find the bike a good match for me, the CBF600 I rode in Europe did everything better as a touring machine. The 19″ front wheel on this will be little better on gravel but riding up high on what is still a full weight road bike it’s not something I would ride too far off road. Anyway is it a good bike no doubt, it’s just me that doesn’t ‘get’ these 200+kg road bikes dressed as off roaders. 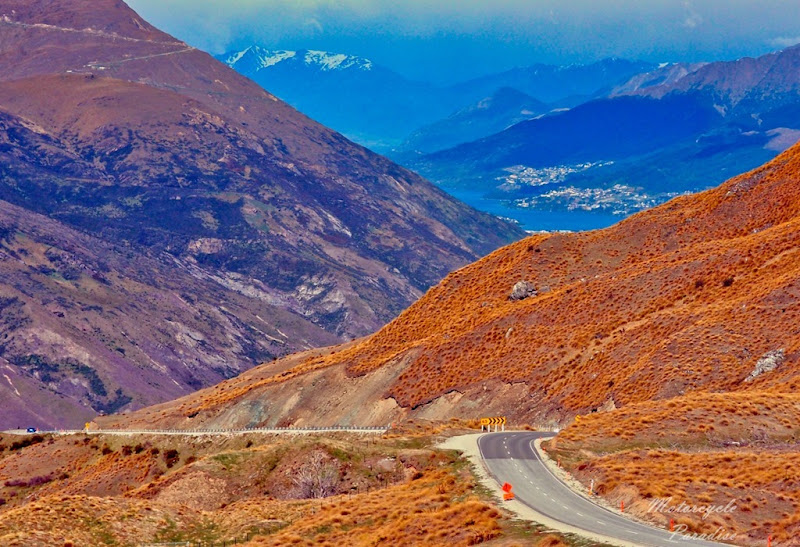 From Wanaka I rode the spectacular Crown Range, perhaps the highest road I traversed this tour over to historic Arrowtown. I was a little disappointed with Arrowtown, they have this wonderfully preserved frontier look town yet the main street is chock o block full with new SUV’s and hire cars all blocking the shop frontages and spoiling any chance of photo’s. Why not make it pedestrian zone…

My mate at the zig zag road. 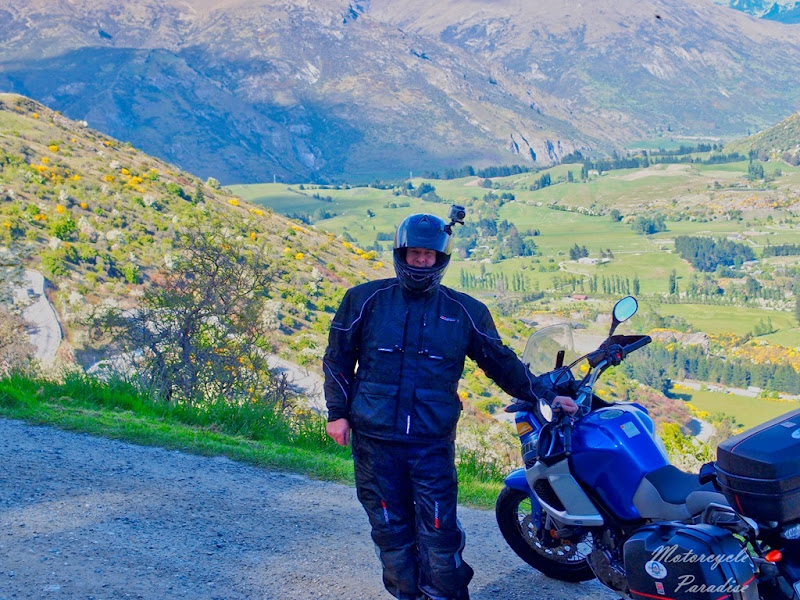 He was thinking about the Yamaha Tenere so chose to rent one but already commented about the weight. As I said I don’t get ADV bikes, I mean 260kg to go off road, you must be joking? Perhaps because we both used to ride two stoke moto-x bikes that are 1/3 the weight it seems so odd. 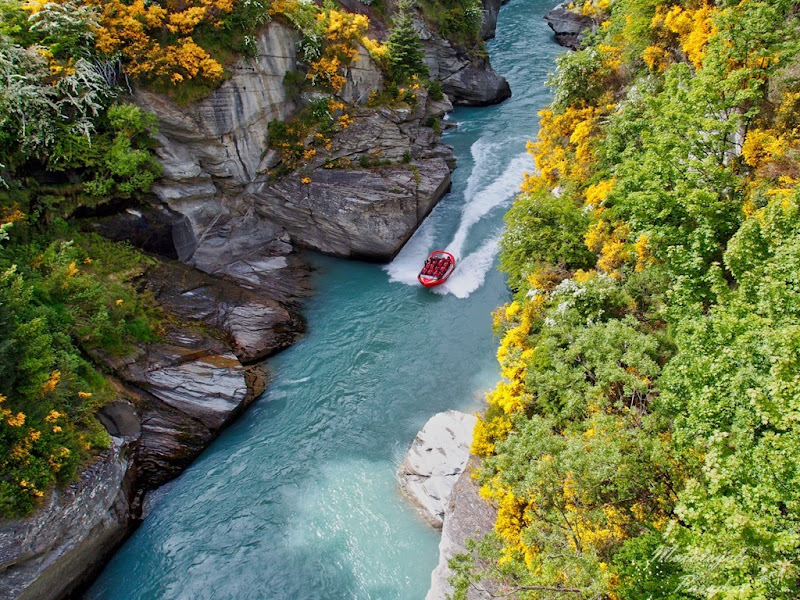 Saw some of the Jetboats the South island is known for. 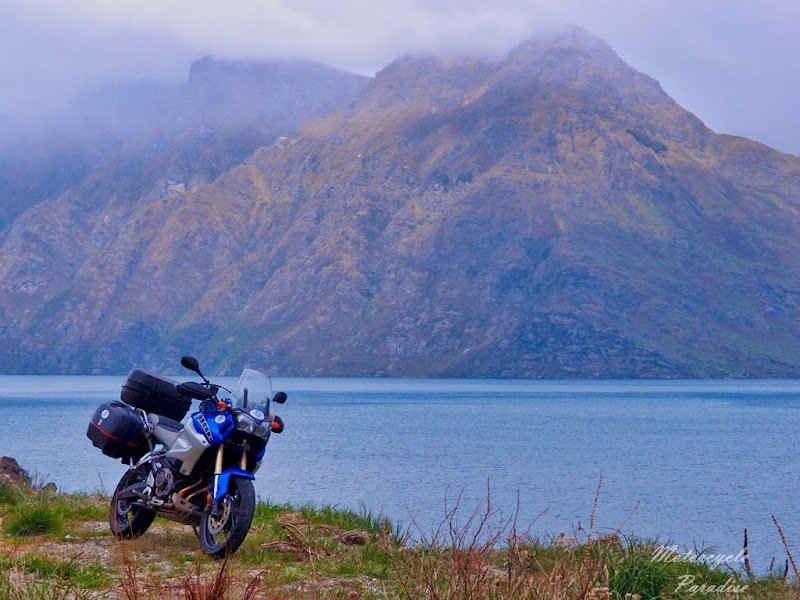 Riding to Glenorchy via Authurs Point encountered a spot of rain. It looked rather heavy ahead so after some thought’s turned around and went past Queenstown and tried the road from Frankston down to Kingston which also looked wet but as my mate said ‘this is what we came here for’ so we rode on and it soon cleared. 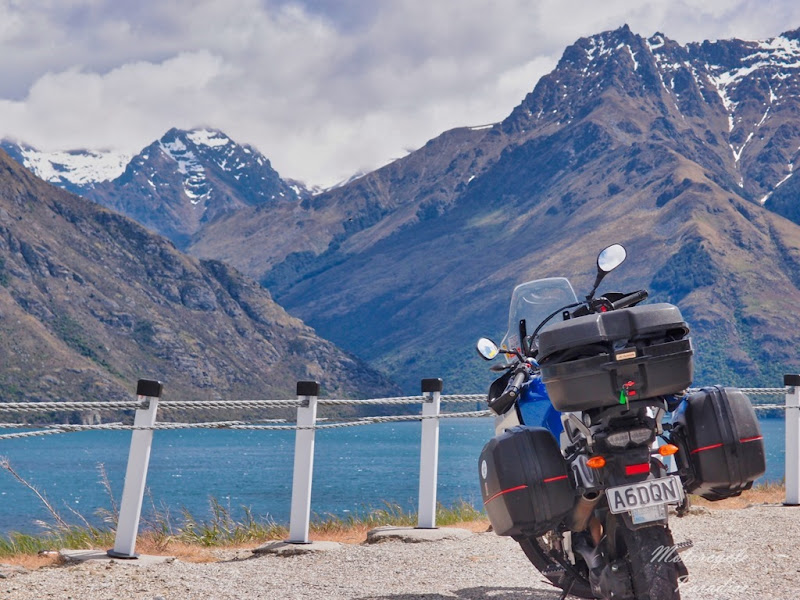 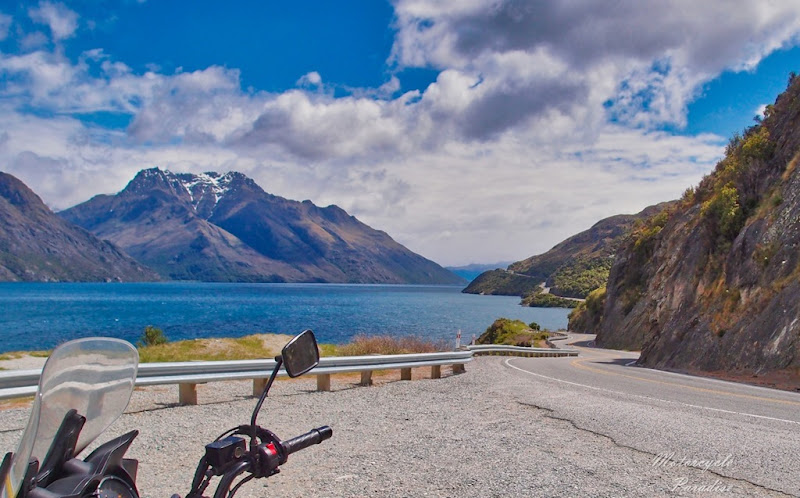 Riding across from Frankston to Lake Tepaco there is an amazingly landscape, from snow covered mountains and fiord like lakes the country changes as you traverse the superb Lindis range and on to an area with huge tree less grassy hills with lunar like canyons. 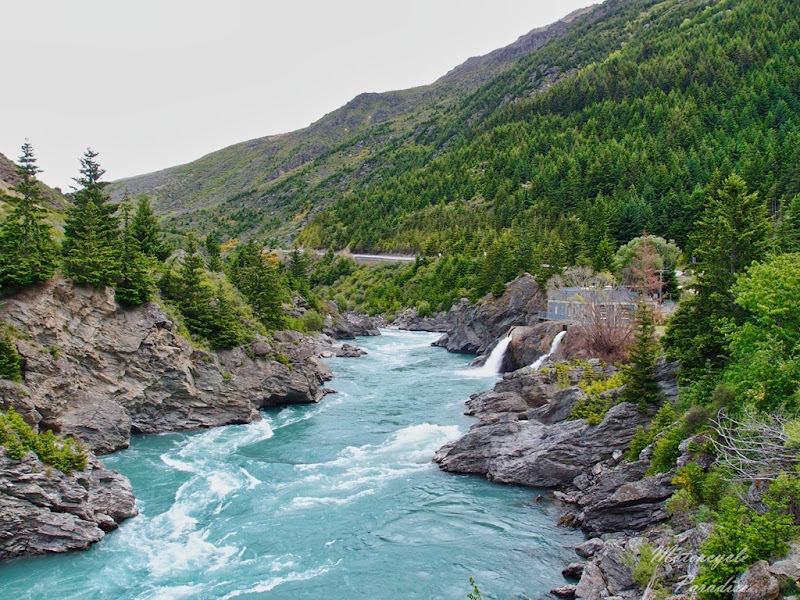 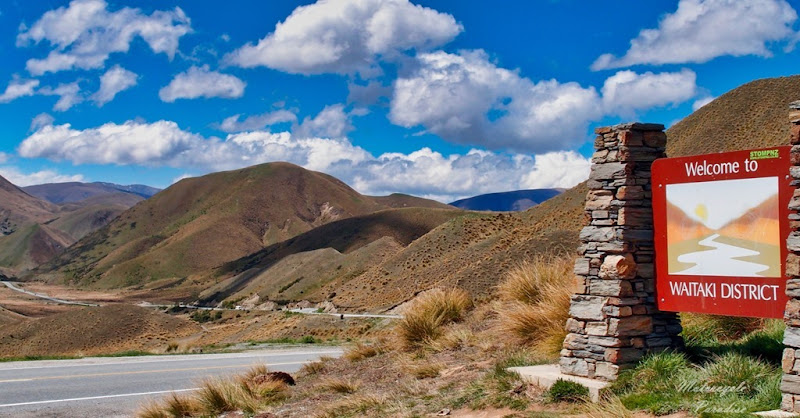 Very strong cross winds on last few days, coming into lake Tepaco the wind would blow me across my lane which was no fun at all. The temperatures plunged so I had to don my thermal base layer but generally was comfortable despite the ice blast wind. The water in these glacier fed lakes has the most amazing blue tinge which you have to see to believe. 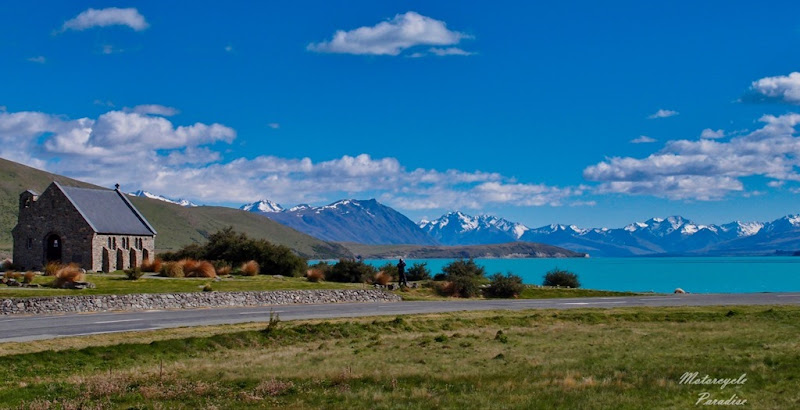 Lastly, great riding roads are located quite close to Christchurch in the Akaroa area.

The roads in NZ are great and have so few cars that they are a non event. Airfares from Australia are as low as $99AUS, fuel was between $2.15-2.20 a litre but the Vstrom was cheap to operate even at these rates.
Accommodation was pricey and I found Wi-Fi lacking but I’d get a sim card in future. Meals ranged between $20-$40NZ which is expensive but fast food is much less. I cannot think of anywhere you could go and ride so many fantastic roads with such amazing scenery so easy as New Zealand. I had a great time despite the poor selfie below 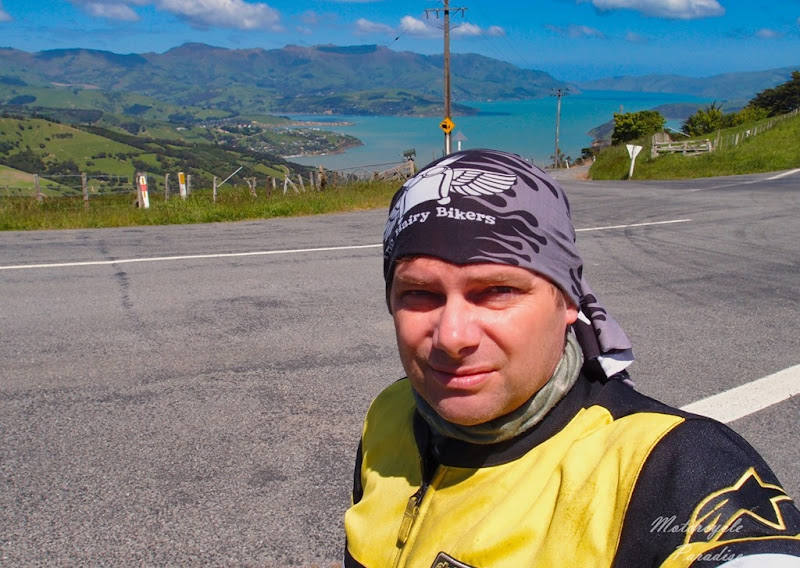 Follow up – no video, my mate struggled to get anything decent from the Gopro, the device produces very poor quality in the overcast light. We also agreed the POV helmet footage was boring.

2018 notes – can’t believe I have not been back here. Despite being old photos because I used a camera there was something to work with now. But they were just jpegs from small sensor camera. Oddly I cannot recall the Olympus I had then so suspect I sold it again after the trip. This was before I realised I needed to learn post processing and was always changing cameras seeking better quality. Only now am I grasping how much post editing matters.