I own both of these and having tried both to ease cramp on long rides I want to share my experience.

Both are small devices that affix to the throttle grip to sort of allow you to hold the throttle open by your palm/wrist so you can release your grip around the throttle and stretch your fingers for a bit. Both when installed need to be angled slightly higher than horizontal due to the amount of rotation needed for highway speeds. (this has been the case on 3 motorcycles I have owned and would likely apply to most)

A couple of years ago I purchased a Throttle Rocker seeking to ease hand cramp that creeps in on a long rides and when finishing the day on highways or other boring roads. 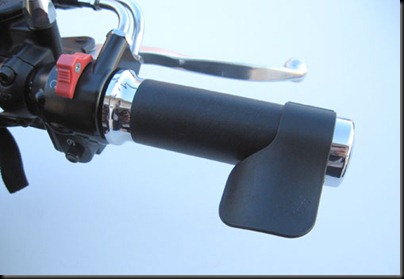 The Throttle Rocker is a good size and curves down on the inside left corner of the lever to interfere far less with the throttle when you back off or are not cruising and coming to a stop. It affixes to your throttle grip with a Velcro loop which unfortunately just doesn’t manage to hold it in place for very long. So while it works well enough while fixed in place, no matter what I did it rotated down and loose and became useless within 20 minutes. 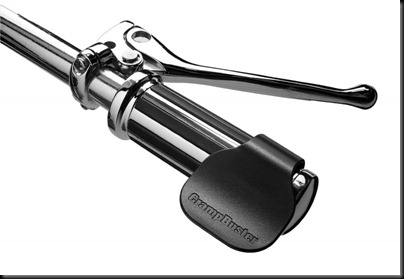 I purchased the Crampbuster last month for my Easter tour and it is affixed not by Velcro but rather in the way it is designed. It is spring steel that you spread and push onto your grip and once fitted it can rotate up but never down on the throttle grip. That’s the good news. Unfortunately I found that when I was not cruising the Crampbuster often made me accidentally open the throttle more than I wanted to which once was quite dangerous.
It is wider than it appears in the above photo where someone has placed it half on the bar end. There is a thin version however this is far too long and would be more awkward in the off throttle position. People say simply rotate the Crampbuster up and out if the way when needed and then return it into place however this is not super easy on the roads and the tendency is to not do this if just slowing for a small time.

If someone sold one with the same shape and size of the Throttle Rocker but with the clamping system of the Crampbuster then these just might work. Apparently the original Throttle Rockers were exactly this but changed due to infringement on Crampbusters design.

So how effective are they? The main problem is if sitting level like in the above photo when mounted they will be pointing down when you are on highway with throttle open so you cannot rest your wrist on them as you might imagine. They must be mounted pointing up more to be in the correct position when the throttle is opened on highway and there in lies the problem that pointing up they make using the throttle at low speed and from close sometimes awkward. It is easy to have them interfere with your throttle application.

Theses sort of devices do offer you some means to relax your grip on throttle but are awkward. Still if you are in some pain touring then perhaps try one, the narrow crampbuster may for some peopple not interfere with their riding. They are still a better bet than throttle locks in my opinion as throttle locks all have the bike either gradually slowing or accelerating and the effort needed to engage and disengage then for a couple seconds exceeds the relief they provide. I have tried a couple and consider them next to useless.

Having tried many times over years of touring I have come to the conclusion that neither the wrist rests or the throttle locks offer me any assistance and I have given up on them. As of 2014 I have a FJR 1300 with electronic cruise control and there is no substitute.