This was written some time ago, Held have since expanded with 1000’s of new items from making a range of about 6 motorcycle gloves. I am told the quality is not what it once was, but this post is about the original gloves.

I have been talking about getting new gloves for the tour and I finally got out on the bike on the weekend to test them. 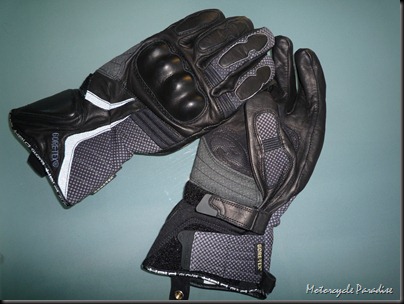 The gloves I went for are made by Held and the model is called Score. I became aware of the company when I started looking for what gloves were getting the very best reviews. The guys over at WebBikeWorld are very demanding with gloves having tested so many and so when I noted the Held gloves are one of their favorites I figured that was pretty high praise.

Held is a German glove company dating back to 1923. I have not seen them in Australia and if here the dealers would want ridiculous amount for them so I ordered from the USA. The build quality is very high and superior to the two more famous Italian brands of which I have already owned.

The Score is a 3 season touring glove yet construction is technical like a race glove. I am not into quoting specs for things I review, you can read the factory line at the web site. What I will say is they perform superbly. Despite being a Gore-Tex waterproof glove they breath incredibly well. My hands were warm in the early morning over Mt Glorious with full wind protection and then when the day warmed up I was ready to change to light gloves however my hand were not hot nor did they sweat at all so I kept wearing them all day.

Now a sub tropics summer glove they can never be however the inner has a special liner which wicks away moisture and kept my hands at a even temperature inside despite the varying temperature outside. And so to the all important comfort factor regarding fit and form. I had read other reviewers rate these as the most comfortable gloves they had ever worn and I think they are very good indeed.

They are not cheap gloves, in fact the most expensive I have ever purchased. Since I suffer from chaffing with gloves due to hand dermatitis I have no choice but to try for the best to keep me riding however you could spend as much elsewhere and get gloves that are only 1/2 as good.

Update, I still have these gloves 2018 and still in good condition and fully useable for some time yet, I even crash tested them on the ice I hit in Japan years ago and they literally saved my hands from any injury when I slid along the road into the gutter. Exceptionally well made.